The Libreria Antiquaria Il Cartiglio was founded in 1985 by Roberto Cena and Elsie Deferre who are its actual joint-owners.

During their activity, Roberto and Elsie have published prestigious both thematic and generic catalogues. The Galleria has taken part (and still does) to worldwide known exhibitions in Italy and the biennal antiquarians’ exhibition in Turin which are organized by Roberto Cena himself as President of Associazione Piemontese Antiquari.

Il Cartiglio is located in the centre of Turin and consists of three expository floors in which you can find prestigious books and antique prints, manuscripts, Neapolitan guaches and watercolours’ paintings, antiques maps, historical documents and graphics made by great artists and by the most worldwide-known exponents of 20th century.

Since many years Il Cartiglio collaborates with various institutions and prestigious firms, giving them books and antique prints as company tribute.
Moreover, with discretion and great expertise, Roberto Cena carries out surveys and evaluations in collaboration with several professional offices.

Il Cartiglio is specialized in :

This wide offer has the intention of satisfying any demand, be this for collecting, furnishing or tribute. 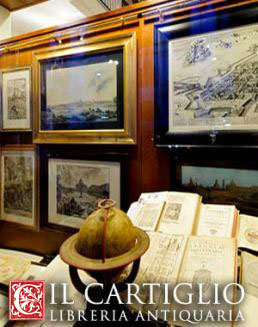 Founded in 1985 by Roberto Cena and Elsie Deferre. It offers valuable antique books and prints, manuscripts, Neapolitan gouaches and watercolors, old maps, historical documents, graphics by old masters and the best authors of the '900.